1. Background detail about the initiative

2. Introduction to the case: brief history and goals of the initiative

Developed by the Language Centre of the University of Padova in collaboration with the International Office (IO) in 2015, eTandem is a Virtual Exchange project between incoming international students and domestic students interested in a language and intercultural exchange.

In the very beginning only Italian and English were used as linguae francae in the exchange between peers, but in the following iterations additional languages such as Spanish, French, German, and Portuguese have been added, thus contributing to multilingualism.

The eTandem project was developed to respond to several needs:

The project was awarded the European Language Label in Italy in 2016 and recognised as an E+VE initiative in 2019, following the e-tutor’s participation in training and the signing of a Memorandum of Understanding.

The eTandem project runs twice a year for 8 to 10 weeks before each semester starts. All domestic students, in particular future outgoing ones, as well as international students staying at the University of Padova in the following semester(s) are invited to apply directly online on the language centre website. The International Office (IO) units send an invitation to all the future international students planning to study in  Padova in the following semester and to all future outgoing students.

Domestic students come from a range of degree courses. A substantial number of them are enrolled in languages and literature degree courses. Another substantial group (recruited through the IO) are future ‘outgoing’ students, who will spend a period abroad as mobile students in the future and are interested in practising their language and/or learning more about the country and university system where they are going.

The number of participants has grown every year, and the most recent edition (12th) involved 65 Italian and 150 international students from all over the world.

Two communication modes are foreseen, in a double line of interaction (see Figure 1):

Figure 1. Outline of interactions in eTandem 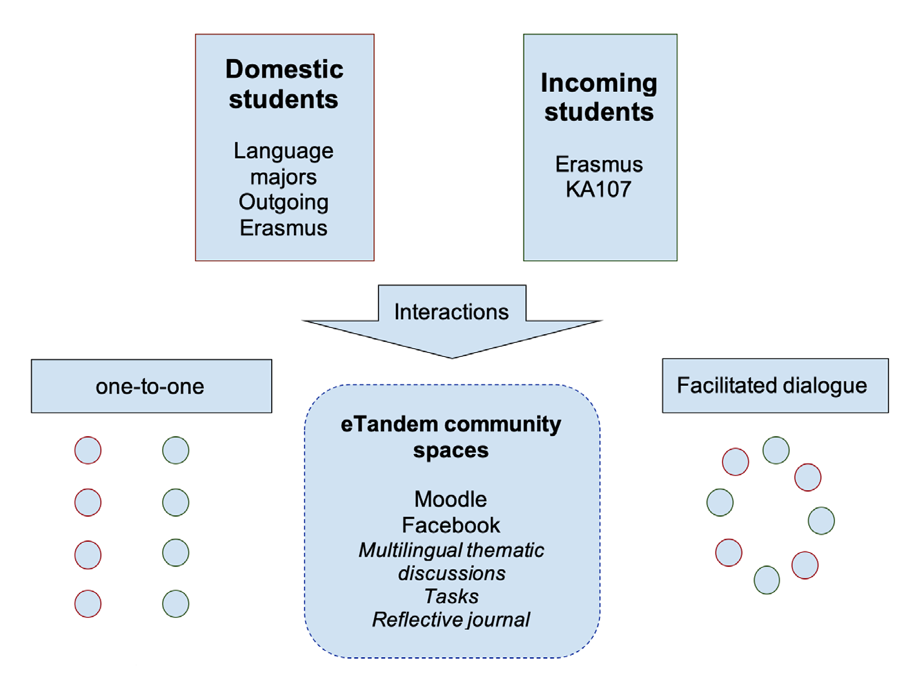 Tools/technology used to implement the initiative

Two separate platforms host the online multilingual community simultaneously: an institutional one (Moodle) and an informal one (Facebook). Neither of them is compulsory, but participating students have nevertheless been invited to join at least one of them to be able to contribute to the e-community.

Students are instead free to choose the interaction language and tools (WhatsApp, Instagram, Facebook, Messenger, Skype, Zoom, etc.) in the one-to-one interaction.

The e-moderators provide discussion topics to favour many-to-many interaction. The first week is aimed at familiarising students with the online platform(s), with the tools and with each other. Theme-based asynchronous activities are included on a weekly basis, from the second to the tenth week, to guide learners through the topics discussed in the e-community. Starting with a Motivation Monday activity, prompts are launched every week,  followed by further sub-themed activities throughout the rest of the week. It is however left free to students to contribute to a discussion they liked, even in the weeks after the prompt has been launched. Both safe and more controversial themes are discussed, ranging from reading, traditions, stereotypes and superstitions, differences between cultures (body language, gestures, and tips), culture shock, cultural intelligence, food, and many others, to more controversial topics such as the role of media, climate change, veganism, social inequalities (job and gender, gender and pay gap), technology and education, humans versus robots, and social inclusion.

In the dyadic interactions, any argument introduced in the social community area can be dealt with, in addition to more personal themes such as families, hobbies, and interests.

Weekly diaries of language and culture are compiled by students on Moodle, mainly aimed at free writing and self-reflection, to enable them to keep a record of what they discuss in the one-to-one interactions and what they think about the intercultural issues addressed in the e-community. While this ‘writing space’ on Moodle contributes to enhancing students’ self-awareness, it also helps tutors to monitor the project development, in particular the constant interaction between students in their one-to-one interactions, and to continuously adjust the project to students’ needs, competences, and suggestions. A final reflection paper and feedback questionnaires are also required at the end of the project.

Synchronous facilitated sessions lasting 1,5 hour have also recently been offered on Zoom, dealing with various topics. The very latest editions have seen a high increase in the number of synchronous sessions being offered, with a total of 8/9  (one per week) are now offered with two facilitators. The increase in the synchronous sessions has been an adjustment made to meet the students’ request during the Covid pandemic.

Domestic students enrolled in language and literature degree courses are awarded 3 ECTS credits upon successful completion of the project, as this has been formalised as an optional activity within their curriculum, while other participants are not awarded credits, as they take part on a voluntary basis. All students are nevertheless issued a certificate of attendance when they successfully complete the following activities required:

Students are also awarded an Open Badge issued by the University of Padova and, formerly, by the E+VE initiative.

Students are asked to fill in a feedback questionnaire at the end of each edition. While it aims at  exploring students’ participation, motivation, and perspectives related to different areas (technological and digital, content, linguistic and metalinguistic, cultural, psychological, and social), it is also a pivotal tool for revision and improvement of the project. With every iteration, following a review of the feedback received, slight adjustments are made.  For example, the number of synchronous sessions has recently been increased from 3 to 8/9 (i.e. one every week), based on students’ feedback and needs.

The project has proven to be highly beneficial at various levels:

Despite being very successful, some drawbacks have been identified in the way the eTandem is implemented and integrated, prompting actions to further improve the initiative:

The project iterations have proved that students’ motivation is crucial to the project success. This has been encouraged by: